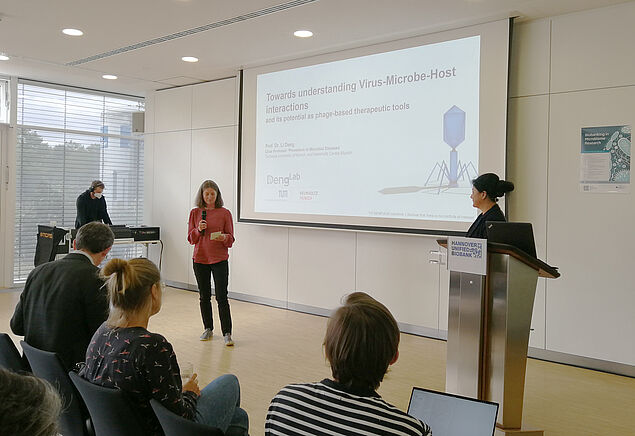 The microbiome plays a role in numerous diseases: chronic inflammatory bowel diseases, skin eczema or lung diseases. It even has an effect on organs such as the brain, to which it does not reach. Rightly so, it has increasingly become the focus of research. In order to achieve reliable results, the technique of sample collection and storage plays a major role. On 15 September 2022, the German Biobank Node (GBN) invited participants to a workshop on "Biobanking in Microbiome Research" to bring together microbiome researchers and biobank representatives. The event was hosted by the Hannover Unified Biobank (HUB), partner biobank of the German Biobank Alliance (GBA). Around 50 interested parties from research and biobanking took part.

Research so far proves to be Eurocentric

Dr. Elke Rodriguez explained in her talk on "The skin microbiome in health and diesease" that not only stool samples are of interest for microbiome research, but also skin samples, various smears and biopsies. However, research is far too focused on the European region, said Prof. Mathieu Groussin, who spoke about "Biobanking the worldwide diversity of human-associated gut microbes". The aim of the "Global Microbiome Conservancy" initiative founded by Groussin is therefore to collect biosamples in different parts of the world. There is also a difference in the microbiome of urban populations compared to rural ones – it is less diverse. However, the reasons for this are not yet fully understood; dietary habits could play a role or the use of antibiotics. In order to provide research with a more differentiated sample basis, a biobank is to be established in Kiel for the initiative's extensive sample collection.

In her talk on "The gut microbiome, diet and cardiometabolic health", Dr. Cristina Menni reported on results from the TwinsUK cohort, which was founded by the renowned epidemiologist Prof. Tim Spector at the beginning of the 1990s. For example, the Predict study provided evidence that a person's microbiome is influenced by the food consumed. Certain microbes in the gut are also linked to biomarkers for metabolic diseases. The microbiome is even more closely related to these markers than to genetic factors.

How bacteriophages in turn influence the microbiome was discussed by Dr. Li Deng in her presentation on "Peering into an unknown viral world: missing pieces in the study of virus-host interaction". Bacteriophages regulate metabolism, Deng said, by killing bacteria or altering them through horizontal gene transfer. This could predestine them as a "modern antibiotic". But the understanding of the interactions between phages and the microbiome is still in its infancy – one can imagine an iceberg, of which a small tip is currently visible, but the gigantic rest still unknown.

Prof. Dr. Burkhard Tümmler lamented that sampling techniques were not available to capture this "known unknown". For example, to obtain all microorganisms in a stool sample, it would have to be frozen within a few seconds using conventional techniques. This is another reason why only a glimpse of the tip of the microbiome iceberg is currently conceivable. "Microbiome research is a highly complex field," concluded programme committee member Dr. Gabi Anton. "In biobanking we usually strongly advocate standardisation, but in this case it might be too early for that. Now we need to find new methods to get closer to the unknown. There is an urgent need for research here."