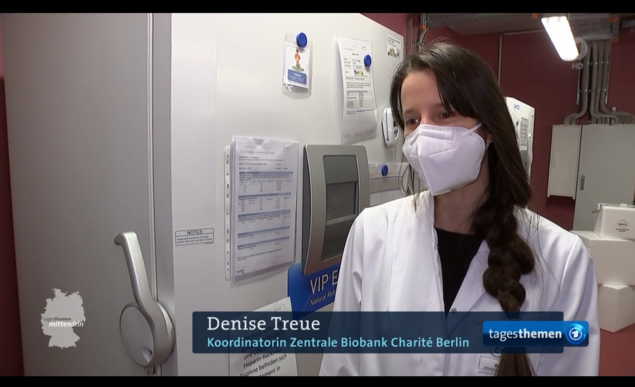 On January 27, 2020, the first positive SARS-COV-2 case was detected in Germany. One year later, the "Tagesthemen" team reported in detail from the Charité – Universitätsmedizin Berlin, highlighting topics from health care and research. The feature "mittendrin: Forschung gegen Corona" ("at the centre: research against Corona") at the beginning of Tagesthemen shows the biobanking of SARS-CoV-2 samples at the ZeBanC – the Central Biobank of the Charité and the Berlin Institute of Health (BIH). ZeBanC has been a partner biobank of the German Biobank Alliance (GBA) since 2019.

2.5 million viewers watched the January 26 edition of Tagesthemen. Work in the biobank can be seen starting at minute 1:28.