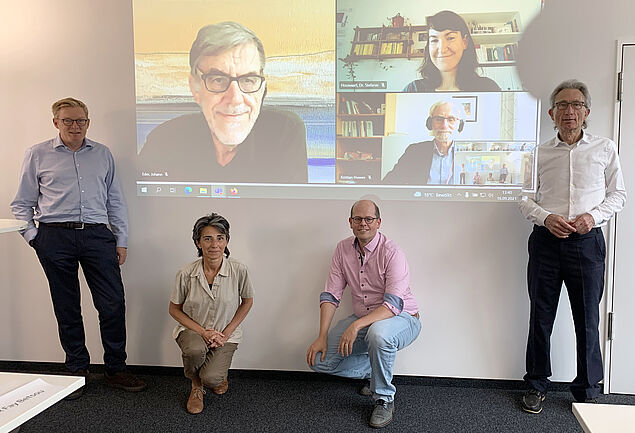 Feedback from the Scientific and Ethical Advisory Board

"This infrastructure is exemplary," said Dominic Allen, member of the Scientific and Ethical Advisory Board of the German Biobank Node (GBN) and the German Biobank Alliance (GBA), during this year's meeting of the board. "For several years we have observed continuity in the work of GBN and GBA. The team spirit of this community is its particular strength."

Broad presence of GBN and GBA

The advisory board members particularly praised the expansion of the GBA, which this year added another partner biobank and 14 observers, bringing its current total to 35 sites (31 of which are university medicine sites) in Germany. Furthermore, they were positive about the joint project ABIDE_MI ("Aligning Biobanking and Data Integration Centres Efficiently") of the GBN and the Medical Informatics Initiative (MII) with the aim of linking biospecimen and patient data from routine care and making it usable for research. They stressed that it was now important to expand the cooperation with the Network of University Medicine (NUM), founded in 2020, and to clearly define responsibilities – especially in the area of clinical trials.

"We appreciate the open attitude of GBN and GBA and are very much in favour of the representatives sharing their experiences – also at the European level. This is reflected in the close cooperation with BBMRI-ERIC," Dominic Allen summed up. "Other member states should copy the model infrastructure of GBN and GBA."

The first meeting of the Scientific Advisory Board in the current funding phase, which started in January 2021 and will run until the end of 2023, took place in Berlin on 16 September 2021. During the hybrid meeting, SEAB members Dominic Allen, Prof. Dr. Christopher Baum, Dr. Fay Betsou, Prof. Dr. Johann Eder, Dr. Stefanie Houwaart, Prof. Kristian Hveem and Prof. Morris Swertz shared their views on the work results of the past year and discussed future tasks of GBN/GBA. Christopher Baum, Chairman of the Board of the Berlin Institute of Health (BIH), and Morris Swertz, Head of the Genomics Coordination Center at the University of Groningen, have joined the Advisory Board this year.

The Federal Ministry of Education and Research (BMBF) provides funding for GBN's work during a third funding phase from 2021 to 2023 with approximately € 3.5 million. The umbrella organisation of academic biobanks in Germany has been based at Charité – Universitätsmedizin Berlin since 2014. From 2024, GBN will be established at the BIH.