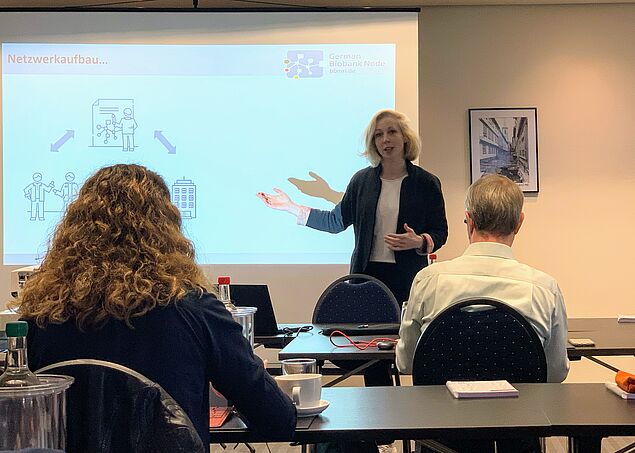 At the beginning of October 2021, 32 representatives of the German Biobank Node (GBN), the German Biobank Alliance (GBA) and the European biobank organisation BBMRI-ERIC met for a three-day conference in Erfurt to outline the strategic direction of GBN and GBA for the coming years. The participants were able to build on the recommendations of the Scientific and Ethical Advisory Board (SEAB) of GBN/GBA, which had met in mid-September. Under the motto “Paradigm shift in biobanking: are you still collecting or already networking?”, the strategy meeting took place as the first face-to-face event of the GBA since 2019 under 3G regulation (“Geimpft, genesen, getestet“ – vaccinated, recovered, tested).

Which paths should biobanks take in the future? And how do GBN and GBA help to open up these paths? To find answers to these questions, the first day initially focused on challenges of biobanks at the local level. On the second day, the group derived central fields of action for the network from this – from collection strategies to finance to external communications. On the third day, the participants agreed on measures and responsibilities. “The strategy meeting was very constructive and inspiring. I am pleased that we agreed on concrete goals and joint activities that will lead us there,” summarises Dr. Cornelia Specht, Managing Director of the GBN.

Seize opportunities as a “science enabler”

Prof. Dr. Martin Lablans, IT director at the German Cancer Research Center (DKFZ) in Heidelberg, was also enthusiastic: “The biobanking community is characterised by a special culture – this is perhaps related to the role of biobanks as intermediaries, as “enablers“ for research. And currently there are many opportunities opening up, also at European level, that need to be seized.“ “GBN and GBA have achieved a lot in recent years – this is noticed in Europe and Germany is seen as a role model,“ BBMRI-ERIC Director General Prof. Dr. Jens Habermann agrees, who attended the event as a guest. “GBN and GBA can look into the future with confidence and move forward in solidarity with BBMRI-ERIC.“

Passion and a breath of fresh air

Many participants praised the open discussions and new ideas and approaches developed during the meeting. “I was very pleased with the sometimes passionate exchange on so many different topics,“ says Dr. Romy Kirsten, Head of the Liquidbiobank at the NCT Heidelberg. ”Looking at these topics together offers enormous added value and the 'newer' biobanks in the network are a breath of fresh air for us.” This is supported by Dr. Angela Langer, deputy head of Augsburg Central BioBank, which was newly admitted to the GBA as a partner biobank this year: ”The fact that we are pursuing a joint approach in the GBA, driving harmonisation and promoting the exchange of samples and data is of great importance, especially for us 'young' biobanks.”

”After the long period in which we were only able to exchange information virtually, this strategy meeting was a particular benefit and has brought our community even closer together,“ says GBN director Prof. Dr. Michael Hummel. ”Now it is up to us to consistently pursue our common goals.” GBN is currently working on the results and will present them again at the next GBA meeting. On this occasion, other interested parties can also join the working groups that have been formed.