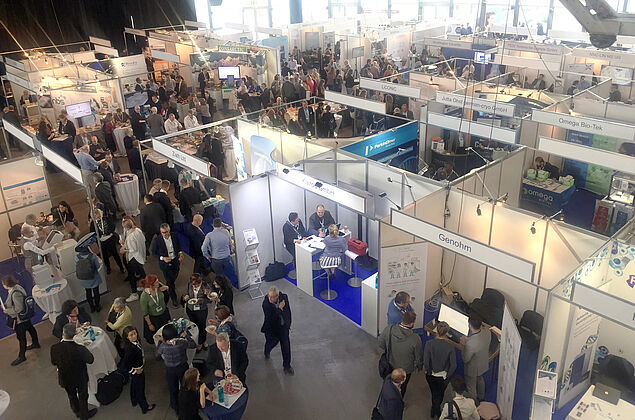 Biobanking for a healthier world – EBW 2019

“We feel like zoo-born gazelles expected to survive in the wilderness of the biobanking community Serengeti plains, surrounded by lions, jackals, and hyenas,” said patient representative Richard Stephens at the start of Europe Biobank Week 2019. He emphasised in his speech that the importance of biobanking must become more transparent. This is possible with the help of “success stories” – comprehensible reports of successful research projects completed using biosamples and associated data.

Scope for a change of perspective

The call for success stories was made several times during the EBW, which took place in Lübeck on 8–11 October, and was voiced by representatives from biobanks and industry as well as patient organisations. The conference audience was very diverse: beside the main target group of biobanks, the total of over 700 participants included just as many participants from other networks, politics, academic research, patient representatives, and industrial enterprises. Representatives from more than 40 countries networked during the EBW. The conference programme was also extremely diverse: from overarching topics such as “Biobanking for precision medicine” or “How do biobanks support clinical trials?” to an Oxford debate on whether patient representatives should be included in the governance structures of biobanks, to quality management and IT for biobanks, the EBW covered a comprehensive range of topics. The EBW is co-organised by BBMRI-ERIC (Biobanking and Biomolecular Resources Research Infrastructure – European Research Infrastructure Consortium) and ESBB (European, Middle Eastern and African Society for Biopreservation and Biobanking). During the opening ceremony, Erik Steinfelder, Director-General of BBMRI-ERIC, reminded of this year’s motto for the EBW: “Biobanking for a healthier world is a clear call to action – today.” In his speech, he urged participants to use the conference as an opportunity to learn from one another and to work together more effectively.

The EBW 2019 was a huge success for the German Biobank Node (GBN) and German Biobank Alliance (GBA): during the opening session, GBN coordinator Prof. Dr. Michael Hummel shared preliminary insights into development of the German network – he highlighted the cross-biobank “Sample Locator” tool to search for biosamples and associated data online, GBA’s audit programme and the advanced training offers. These tools and programmes were presented in greater detail over the following days during a total of ten presentations by GBN/GBA representatives. The joint appearance was rounded out by two poster prizes: Dr. Carolin Wedel (BMBH, Heidelberg) won with her poster on the second round of GBA’s tissue ring trial (C. Wedel, D. Kieslich de Hol, E. Herpel, S. Schmitt | GBA Tissue Ring Trial: The Second Round with an Extended Concept). Dr. Ronny Baber (Leipzig Medical Biobank) was successful with his poster on using public relations to increase biobanks’ visibility (R. Baber, M. Siegemund, J. Dorow, J., K. Kolbe, J. Thiery | Increasing the Visibility of Biobanks Using Public Relations – Experiences from the Leipzig Medical Biobank). Representatives from GBN and GBA contributed a total of ten posters. GBN also represented the German biobanking community with a well-attended stand in the industry exhibition. Many interesting conversations took place here. Participants from all over Europe inquired about the activities they had learned about in the various presentations.

From “friendly audits” to “potential users”

In addition to the Sample Locator, the focus was on quality management and the “friendly audits” that prepare GBA biobanks for accreditation according to ISO 20387. “I congratulate the German Biobank Node on the excellent internal audit system which is exemplary in Europe and should be used as a model by other countries. This will certainly help in guaranteeing an appropriate quality of biological samples and related data,” said Georges Dagher, Research Director of the French Inserm Institute, after QM coordinator Christiane Hartfeldt’s presentation on the concept. The session entitled “Becoming a Biobanker: Yes We Can!” once again made clear that in light of the growing professionalisation of biobanks, increased standardisation and harmonisation, the need for further staff training is also growing. PD Dr. Sara Y. Nußbeck (UMG Biobank) presented the GBA programme, which includes both onsite training for technical assistants (already held successfully) and online courses for all biobank employees (launch planned for early 2020). GBN Managing Director Dr. Cornelia Specht presented the results of a survey conducted among potential biobank users: biobanks must raise their profile on the local level and at the same time offer greater transparency in terms of their offers and services, Specht explained. “These survey results form an excellent data basis for further development of GBA’s activities,” commented biobank consultant Dr. Daniel Simeon-Dubach.

In order to survive and meet future challenges biobanks and their networks must continue to develop. “One out of two people will be diagnosed with cancer. More than 20,000 oncological studies have not yet been completed worldwide. We absolutely must speed up biobanking and operate it on a larger scale!” said Dr. Piers Mahon (IQVIA). The keynote speech by Dr. Olli Kallioniemi, Director of the Swedish SciLifeLab, made clear that the demands placed on biobanks are also changing considerably in light of the latest research methods. He reported on research successes that he was able to achieve specifically with the help of multilayer profiling (see our interview with Olli Kallioniemi for more information). Dr. Stefanie Houwaart (Haus der Krebs-Selbsthilfe Bundesverband e.V.) reminded that sight should not be lost of who is actually being addressed with all these efforts, namely the patients. They should be involved in the process as competent stakeholders.

The future developments in European biobanking will be discussed again during the next Europe Biobank Week – in Sofia (Bulgaria) in October 2020.